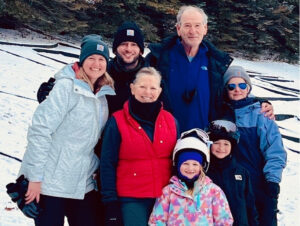 Did you ever wake up suddenly from a deep sleep with an idea that had never crossed your mind before? That’s what happened to me in 2017. I had recently left the field of education after decades of impactful experiences and finished reading the book, DARK MONEY, by Jane Mayer. I knew our country was headed into disaster if we didn’t make some changes, and fast. My waking thoughts centered around the need to find someone to run for Congress and then work non-stop to get them elected. But who? I never had the most remote inkling about running myself until I was jolted awake by the thought of why couldn’t it be me?

My eyes were opened to our societal disparities during my high school years with my first job, as a “big sister” of traumatized 8–9-year-old boys in a home for abused and neglected children. Occasionally I drove them to a home visit, often in the highest poverty areas of Detroit, where many residences in the neighborhood were burned from the 1967 uprising. That’s when I decided I wanted to be a teacher. I graduated from MSU with a BS in child development and elementary education.

I loved teaching, but after 6 years in the classroom (mostly first grade), I left to open an early childhood center. My husband, Rick, and I had difficulty finding good care for our new baby and I realized other parents were experiencing the same. A class I took at MSU about running a childcare business made me realize that the true cost of quality care could not be supported by most families. So I opened a toy (learning) store to subsidize the childcare center. The early childhood center (in Grand Rapids) was well-respected as a model and grew over 15 years to accommodate 150 children from 6 weeks-12 years. I also worked with some businesses to help open on-site childcare for their employees and the community. At our highest point, my businesses employed over 80 people.

From 1991-2003, I worked for the HighScope Foundation, as an elementary field consultant and 2012-16 as Director of Elementary Education. I had the priviledge of working with teachers in very low-wealth communities, including several Native American reservation schools. I observed first-hand the very heartbreaking realities of the inequities in our public school system. The children who needed more, were receiving less. Children traumatized by poverty, with the lack of basic needs, have a difficult time learning. This cycle had to be broken, and there didn’t seem to be an urgency—or even adequate awareness- of this societal challenge.

Over the years, Rick and I invested in commercial real estate, starting with our childcare center building. In 1996, I sold the business (at breakeven) and the new owner paid rent. Then my store expanded, and we mortgaged a new “retail condo” and we rented out our former space. These investments were going to someday fund our retirement. Then the Great Recession of 2008 happened and within a couple years, our tenants went out of business, and we could not pay our hefty mortgages. The properties declined in value by about half. We filed for personal bankruptcy in 2011 and lost almost everything, including our home and the toy store of 30 years. We had played by the rules and worked hard for 30 years, and the dishonesty of Wall Street took it all from many of us. And they got away with it!

At least Rick and I had jobs and in 2012 purchased 10 acres and a small home in Bellaire (Antrim County). We spent summers preparing the soil to start a small farm and in 2021 made it our permanent home. We love living in northern Michigan. So back to my revelation to run for Congress in 2018. We were living in Kalamazoo as Rick was an assistant Women’s Basketball coach for Western. I first declared to run in Congressional District 6. Then Rick was hired as the Davenport University Women’s Coach in Grand Rapids. So we moved back to the Grand Rapids area (Middleville in Barry County), and I ran for Congress in Congressional District 3 instead. This made more sense as that is where we had lived for nearly 40 years. I was on a mission to affect change for the good. I won my primary, but lost to incumbent, Justin Amash. One thing I knew, I loved every minute of campaigning. I would never have met so many wonderful people or learned about their lives by sitting home and wishing for things to change.

That’s when I became involved with the Rural Caucus of the Michigan Democratic Party. The recent election experience made me realize the potential for support in rural Michigan, but it had been largely ignored by the Democrats. This is how I would channel my energy to affect change and I have chaired the Rural Caucus for 3 years. Thanks in part to Zoom, the Caucus has grown to include hundreds of people from all over rural Michigan who care about their neighbors and strengthening their communities.

When no Democrat filed to run in our new 104th MI House district, I realized I couldn’t sit back. There are many common values that most of us share, regardless of party affiliation. That’s where we need to begin and work together to realize the great possibilities for this most beautiful part of Michigan. I am loving the opportunity to meet so many diverse people and learn about their hopes and dreams. As your representative, I will continue to meet with you at your door or another location and be that conduit for opportunities for all to  succeed.

In closing, our 2 daughters, Tiffany and Alison, Ali’s husband-John, and our 2 grandchildren Logan and Peyton, mean the world to me. I am energized knowing we are working for a better future for them and the future of everyone’s children. The outcome of this 2022 election will determine the path our state and country will take—a slide into  authoritarianism or the saving of our democracy. It’s an important choice, please choose wisely.